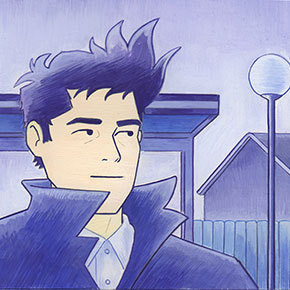 Orbitus, better known as Andrew Lorenzi, was born on Earth's moon in the year 1987. At 13 months, after learning to take his first small steps, he took one giant leap too far, and was swept up in a space current directed towards Chicago. Raised by kind parents, he was known as The Little Moon Baby. Interested in Earth's comics, he pored over the pages of Batman and Peanuts hoping that one day he too could receive compensation for cartooning. As he matured into an Earth-adapted young adult, he felt that the name Andrew would be more appropriate for a career in comics, as it would also fend off lingering pries into his mysterious origins.

He began to draw comics more frequently as he reluctantly adjusted to Earth's college system. He began by studying art, but ultimately earned a degree in English from Northern Illinois in Earth year 2009. In NIU's observatory, he was offered closer, longing gazes at his true home, but it was in drawing comics where he found refuge during long, moonless nights.

His normally autobiographic comics can be found at http://penrod-pulaski.livejournal.com. He has recently begun distributing his first minicomic, and continues cartooning. He has learned to live and perhaps flourish as a member of planet Earth, but on clear nights and in darkened cineplexes, he still feels the gentle pull of the moon at his little moon spirit, and often wonders... will he ever go back?