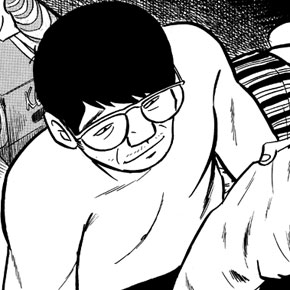 Yoshihiro Tatsumi was born in Osaka, Japan in 1935. He is a pioneering figure in the history of Japanese comics, particularly the development of "gekiga" (serious stories for adult readers), a term which he invented. His deep body of work has recently begun to appear in English editions from Drawn & Quarterly, not only in the short story collections The Push Man, Abandon the Old in Tokyo, and Good-Bye, but also in the massive autobiography A Drifting Life.

His story "Love's Bride" (愛の花嫁) appeared in issue #34 (30 Aug 2003) of the Japanese Ax anthology, and will be included in Top Shelf's upcoming Ax collection.