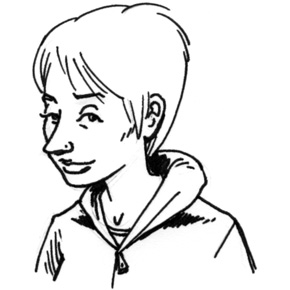 Rachel Bormann was born in 1979 to a couple of teenagers in Northwest Indiana. In second grade, she plagiarized a story for a writing contest without realizing it was cheating. In a third grade attempt at redemption, she wrote her first original story, for which she won Dairy Queen gift certificates.

She currently resides in Bloomington in a cozy bungalow with two benevolent furry creatures collectively called The Babies. She works as a social worker, drives too much, and loves the shit out of macaroni and cheese. “Cakewalk” is the first comic in a collaborative series with the spritely Nate Powell. Write her at rachelbormann AT hotmail.com.