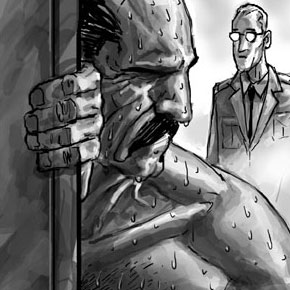 Gabriel Frizzera was born in Brazil in 1975. He started his comic book career drawing and writing in the pioneer fanzine Wazgga Blazka, which was distributed for free in underground events in his hometown of Vitoria. In 1996 he was nominated for the Nova Prize of science fiction for his story "Rain Season," published in the last issue of Wazgga Blazka. In 2000 he moved to Vancouver to study animation, and started working as a Concept Artist for animated films and video games. After a few of years in the industry, Gabriel decided to come back to his old passion and independently published his first story in North America, "Isthmus." In 2006 he finished "Heavy Metal Heart," and both stories were published in a small-run book entitled Codex, along with some of his digital paintings / concepts. Gabriel currently works as a Concept Artist for EA Black Box in Vancouver.

You can visit him on the web at www.gabo.ca.