Lilli Carré was born in 1983 in Los Angeles and currently lives in Chicago where she is studying animation and print. In her latest drawn animation, What Hits The Moon, an aging cartoon character and the moon stare each other down, in an environment where stars may be used to replace decayed teeth. Her book Tales of Woodsman Pete will be released soon by Top Shelf. It features a gregarious but isolated woodsman who is compelled to tell his stories to a dead audience. Lilli is to be included in Houghton Mifflin's Best American Comics series later this year. Many of her extended family members are competitive divers though she herself is not. 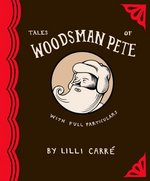