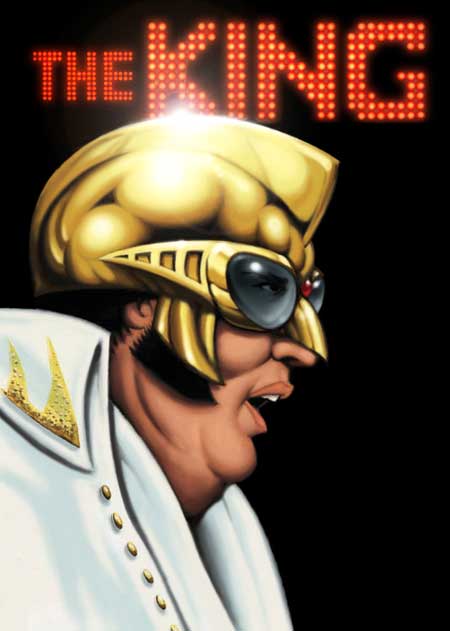 "In the crowded and eclectic world of Elvis literature, once in a while, a breath of fresh air comes along to jolt our senses. Rich Koslowski's The King is one of those rare entries which offers us something different, something which stimulates our senses both narratively and visually. … The King well and truly takes care of business. Read, savour, and enjoy." -- Nigel, Elvis Information Network

"Impressive ... a story about faith and the power of music and legend, as well as a lesson in how one man can become something larger than life." -- Randy Lander, The Fourth Rail

"A remarkably human book, complete with laughter, sadness and a full range of emotions. Do yourself a favor and try this one." -- Scoop

“Koslowski does a great job of not making the book ponderous while remaining as pondersome as you would want it to be.” -- The Cultural Gutter

From the award-winning creator of Three Fingers, comes an all-new, pop culture adventure/mystery. The King is an offbeat tale of one very enigmatic Elvis impersonator who’s taking the Vegas strip, and the world, by storm. Shrouded in mystery with the shining gold helmet that covers his face, The King’s performances are so mesmerizing that fans are starting to believe he really is Elvis Presley. Through investigative reporting and a series of thought-provoking interviews, a former tabloid journalist makes it his personal mission to find out The King’s true identity. But in his race to debunk The King's latest comeback, he discovers much more than he bargained for. -- Diamond: MAY053049