Went out to Pushdot Studio (generally a photography studio), to see a group show called ONE SHOT, featuring cartoonists showcasing a single panel, culled from a longer narrative. The intent being to show the power that even a single panel might have, whether it be in context, or separated from the narrative, on its own level. The results were mixed, formally (a few examples simply didn't hold water on their own merit), but the artwork itself was for the most part, really gorgeous. Jenn Manley-Lee curated, to nice effect, and Colleen Coover's piece for the show, was also used as the promo art. 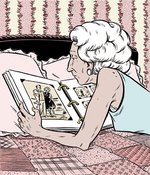 Graham Annable and his studio-mate John (with whom he worked, at gazillionairre Phil Knight's new animation studio, whose name i forget), were the first guys i bumped into, and it was just fun from there on out. I has some good conversation with folks like Steve Lieber (and his lovely wife Sara), Kip Manley (husband of the curator), Jesse Hamm, and Zack Soto. My intern Jacq showed up too, bit about 20 minutes late, so we and her roommate Bowen walked across the street to legendary brewpub, Bridgeport Brewery for some suds. On tap tonight? First their award-winning IPA (literally my favorite beer in the world) and a seasonal Belgian-style summer lager call SÅ«pris that kicked ass.