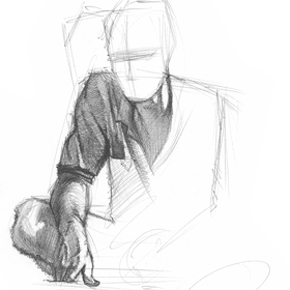 From as far back as Douglas can remember, he was always drawing or painting; creating in one form or another. In fact, as a child, this was done to such a large extent that it even became a challenge for his parents to ground “Dougie” for his messy room; because, while his toys may have been taken away, he’d simply construct his own out of school notebook paper, Scotch tape, crayons, and/or the occasional dried-up piece of Play-Doh that had rolled under his desk. A formidable adversary Douglas was…and still is today…minus the Play-Doh (though that’s not entirely true).