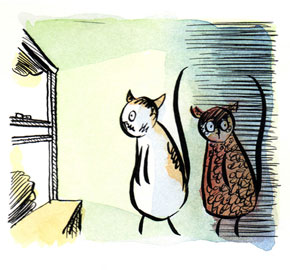 John C. Ralston was born in Eugene, Oregon in 1976, but grew up in Lawrence, Kansas. He attended the Cooper Union for the Advancement of Science and Art from 1994 to 1998, getting a BFA. He currently lives in Lawrence, Kansas, with his girlfriend, her dog, and three cats.

The sum total of John's comics-making is his “A Year in Comics” project, in which he drew a page of comics every day throughout 2007. The project is viewable at: http://ayearincomics.blogspot.com/

"The Hole in the Wall" is from of the tail-end of that project. It was drawn from early September to early October of 2007, and is part of a larger story that takes place in Wisconsin and underground.