The Comics Journal has raved, "There's nobody better at telling a story than Tom Hart", and Banks/Eubanks is an ambitious tale told with simplicity, wit, and the unique combination of wild antics and deep insight that is his signature. Set in summertime Boston (and central Florida during a tropical …

"Tom Hart is one of the few cartoonists whose work I actively seek. There is a dept of feeling in his Hutch Owen stories that places them among the best comic book work I’ve read." -- Joe Sacco

"[Hart’s] funny-looking people . . . convey a level of character and emotion that more intricate … 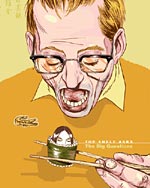