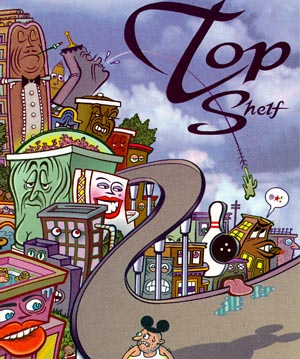 Brett and Chris first became friends, and then, at the Small Press Expo (SPX) in 1997, decided to become publishing partners in the newly formed Top Shelf Productions, Inc. Since that time, Top Shelf Productions has published over 350 award-winning and critically-acclaimed graphic novels and comic books that have helped to revitalize interest in comics as a literary art form. Most notably, John Lewis, Andrew Aydin, and Nate Powell's March, Alan Moore's From Hell (with Eddie Campbell), Lost Girls (with Melinda Gebbie), and The League of Extraordinary Gentlemen (with Kevin O'Neill), Craig Thompson’s Blankets, Jeff Lemire’s Essex County and The Underwater Welder, Jeffrey Brown's Clumsy, and Kim Dwinell’s Surfside Girls -- all of which have garnered accolades from the likes of CNN, NPR, MSNBC, The Late Show, The Daily Show, Time, USA Today, Entertainment Weekly, Publishers Weekly, and the New York Times. Several have been made into major motion pictures, with TV shows of Surfside Girls and Essex County coming in 2022 and 2023.