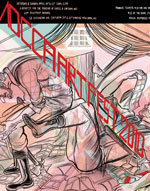 4:00pm Best of the 00s: Artists On their Favorite Comics of the Decade Artists come together to celebrate their favorite graphic novels of the past ten year. Expect a lively discussion and lots of pretty pictures for this one. Featuring: Alex Robinson, James Kochalka, Becky Cloonan, and more. Moderated by: Douglas Wolk and Brian Heater.