By day, Robert Goodin works in the animation industry on shows like Rugrats, As Told by Ginger, The Wild Thornberrys and American Dad. By night -- and on lunch breaks -- he's a comics artist/illustrator whose work has appeared in McSweeney's Quarterly Concern, Mome, Project: Romantic and for the Los Angeles Metro Transit Association as well as editor of the blog, Covered. He currently lives in Los Angeles with his wife Georgene, and their goofy dog Toaster. His latest project, THE MAN WHO LOVED BREASTS, came out in 2008. 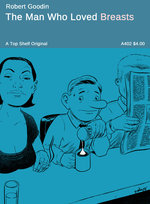