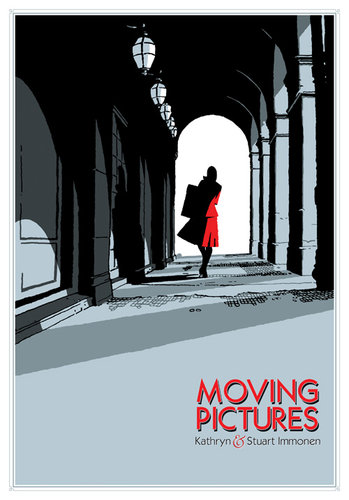 "Most of the story seems less drawn than peeled and chiseled away from absolute visual and moral darkness... [Moving Pictures] suggests how art can be a lifeline to meaning at a moment when nothing seems possible but betrayal." -- Douglas Wolk, The New York Times

"This elegant and evocative historical graphic novel explores the personal relationships involved in protecting internationally recognized works of fine art during the Nazi occupation of Paris ... the storytelling and the characters are as sober as the crisp, heavy black-and-white of its images ... Deftly told, the whole story resonates long after its appropriately ambiguous final pages." -- Booklist (starred review)

"Subtle [and] mature ... the Immonens keep the story spare and focused to allow the ambiguity of survival itself to become the drama." -- Publishers Weekly (starred review)

"An engaging story that comments on art and value, decency and free will, and what it means to follow your convictions." -- Torontoist

"A multifaceted story full of difficult storytelling and ambiguous morality... illustrative of what a major writing talent Kathryn Immonen really is. Husband Stuart’s work is equally excellent, closed and evocative with skillful use of light and shadow." -- The AV Club

"A sparse, bleak experience that moves with slow, deliberate steps through a world of deep, ambiguous shadow." -- Comics Alliance

"Moving and atmospheric... The striking black and white artwork is suitably stark and moody and matched for impact by the brisk, loaded dialogue, lending the characters a life-like depth and immediacy." -- Christian Kerr, BlogCritics

Top Shelf is proud to welcome Kathryn & Stuart Immonen (Ultimate Spider-Man, Nextwave, Patsy Walker: Hellcat, Never as Bad as You Think) to the Top Shelf family with this thrilling, intimate tale of love, war, and art.

Moving Pictures is the story of the awkward and dangerous relationship between curator Ila Gardner and officer Rolf Hauptmann, as they are forced by circumstances to play out their private lives in a public power struggle. The narrative unfolds along two timelines which collide with the revelation of a terrible secret, an enigmatic decision that not many would make, and the realization that sometimes the only choice left is the refusal to choose.

In a recent interview at comicbookresources.com, Kathryn explained that "The history is just a backdrop to tell a messed-up love story that's about how we assign value to things and people, how we behave when not everyone is playing by the same rules" and "in the end, maybe it's all about the fundamentally perverse nature of desire, about not being to help wanting what you want even if you don't know why. And how, from the outside, we really don't know anything about someone else's intimacies." -- A 144-Page Graphic Novel with French Flaps, 5.75" X 8.25", Diamond: MAR10-1136