breathing a sigh of relief...

ComicCon is now again in the review mirror. This year, for whatever reason, i was really zen the whole trip, after a depressing Thursday. (Staying mostly sober might have had something to do with this.) In any case, i had a great time.

We had a boatload of peeps at our booth. And it was hoppin' all weekend. 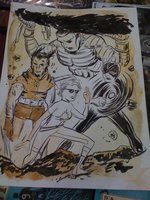 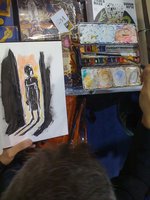 James Kochalka Superstar! (With Kathyrn and Stuart Immonen in the background.) 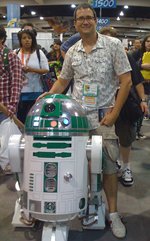 • James Kochalka made it back to ComicCon! Here are his fabulous American Elf strips from the show.

And with release of his SuperF*ckers collected edition, i thought this would be a great time to trot out the Super Awesome theme song video.

Here we come
like a bomb
everybody run and hide!

Here we come
like a bomb
Everybody f*ckin' run and hide!

• Talked with Emily Brundige, who turned me on to her terrific student short film, Pubertina.

Pubertina from Emily Brundige on Vimeo.

Dig on their music vid for "On and On."

• Speaking of Jim Mahfood, here's some snaps i took at the live art party at Soda Bar, sponsored by Things From Another World and Nerd City, featuring the work of Jim, Scott Morse, Mike Huddleston, Ray Fawkes, King Gun, Jason Shawn Alexander, and some really cute talented girl they didn't list in the press kit. 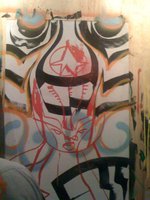 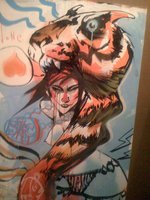 • And finally, the last people standing in our neck of the woods on the floor, were the always delightful Mike & Janice of Fantagraphics.