well, from Vancouver that is (right across the Columbia River) for yet another reading from VEEPS: Profiles In Insignificance. This marks Bill's second event here in the City of Roses (although sadly sans his partner-in-crime, Veeps illustrator Wayne Shellabarger) to promote his book, and as it's on the Eve of The Obama Inauguration, this stands to be a doozy! So if you're in P-Town next week, come out and see what the fuss is all about! 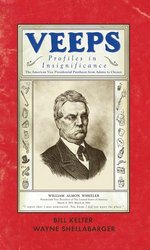 • So my son Carter (just turned four) and myself are almost wrapped up watching the complete adventures of the original Johnny Quest, and hot damn i gotta tell ya, this is some kick-ass shit! Granted, by today's standards some of the ethnic characterizations or nonchalance towards environmental & wildlife considerations might not be considered very PC, but it's never mean-spirited in any capacity. Especially if one keeps in mind this was aired in 1964, near the peak of the Cold-War.

Created by comics vet Doug Wildey for Hanna-Barbera, the locales are exotic, the technology awesome, the adventures are fun and exciting, and the Bad Guys drown, catch on fire, or get blown up all the freaking time! Networks could never get away with this today. Y'know, usually when i watch old television for nostalgic reasons, it rarely holds up, but Johnny Quest is really quite solid. (I think it actually stands toe-to-toe with it's mutant grandchild, The Venture Bros.)

One thing cracked me up in a recent episode though... Johnny and Hadji get kidnapped, and the ransomer asks for $60,000. (What a small mind.) Anyway, Doctor Quest says, "But how can i raise $60,000?!!" What the fuck? This from the guy with tropical island research labs, hover craft, private live-in sailboats, personal jet-packs, giant laser cannons, etc etc.?? Then i dawned on me... duh. Cold War. High-tech. Do the math. Of course, he's got to be on retainer by the U.S. military, no two ways about it.

Sure the animation is limited, but still, this beats the crap out of most of it's competition of the day. (Or today, for that matter.) I mean, really, who can watch an entire season of Scooby Doo or the Jetsons? (Four-year-olds excluded.)

• Jed Alexander has a new website! I met Jed, oh man, at least a decade ago at SPX, and this gentleman's work rocks. See for yourself at Top Shelf 2.0! 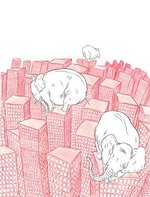 • It's come to our attention that we've got a new celebrity plug for Nate Powell's recent masterpiece, Swallow Me Whole. Turns out someone from the tv show Heroes? Her name is Brea Grant? Now, i've never seen a single episode of the show myself (i'm a wait-for-the-series-to-wrap, and then watch it all in one big go kind of guy), but after checking out the website of this absolutely stunningly-hot hottie, i think i'll jump the gun on that. How cool. (I wonder if she's looking for a Soul Mate?)

• Finally, a day late and a dollar short, here's some holiday art from Christmas and New Year's past. 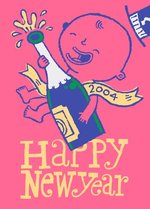