Pretty sick right now, playing leap-frog illness with The Kid, who swims in a cesspool of germs five days a week at day care. Well, that and all the road-tripping has me pretty beat down too.

• Meanwhile, here's some news from both Matt Kindt and Jason Hall, co-creators of the tres fabu Pistolwhip universe.

MATT KINDT
EISNER NOMINATION!
Kindt received his fourth career nomination from the Eisner judges. He was nominated along with Brett Warnock for their design of Alan Moore's controversial book Lost Girls for Top Shelf. For a list of all the nominees click HERE.

LIVING EXHIBIT!
Matt will be appearing every Wednesday and Thursday from 9:30 - 4:30 at the St. Louis Science Center at the Marvel Comics Exhibit through September. He will be on display (along with Peter Pranschke and Dan Zettwoch) for all onlookers as he works on his new comic book projects. Come by for a sketch or chat or just to climb the awesome rock wall that is directly behind his drawing table. For more information on times and admission prices click HERE.

SUPER SPY WEEKLY TO BE PUBLISHED BY TOP SHELF!
Matt Kindt's weekly on-line graphic novel is being sent to the presses as this is being written! It will be in-stores by July and is a whopping 337 pages of full color art and story! It retails for $19.95 and can be pre-ordered (and previewed) HERE!

KINDT WORKS WITH HARVEY PEKAR!
Matt finished a short story with Harvey Pekar over the summer that will be appearing in the anthology Postcards published by Random House. He also did the cover illustration and interior design. You can preview and order it HERE. In stores in June.

INDIE SPINNER RACK ANTHOLOGY
Matt has completed an 8 page series of stories called "The Misery Index" for the new Indie Spinner Rack Anthology. The stories are all true and accurate accounts of Kindt's friends' "most miserable stories". To see a list of all of the contributors to the book, click HERE.

MATT KINDT WRITES/DRAWS THE TICK!
Kindt has fullfilled a life-long ambition to write and draw a Tick story. To read more about it go HERE. It's in-stores in June. 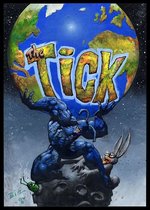 JASON HALL
"Who am I? I co-created Pistolwhip Comics, and have written Pistolwhip: The Yellow Menace and Mephisto and the Empty Box for Top Shelf; Beware The Creeper and Trigger for Vertigo; Star Wars stuff, Hellboy stuff, Crush, and The Escapist for Dark Horse; Batman/Gotham Adventures, Justice League Adventures, Justice League Unlimited, and Detective Comics for DC; and some other stuff... And here's what I'm up to now..."

ITEM #1: My DC Animated Universe body of work continues to grow with this week's release of Justice League Unlimited #33. It's features Crimson Avenger and Stargirl and has appearances by a slew of other JSA-related characters. I'm really happy with how it turned out and I think readers of all-ages will enjoy it. Solicitation information can be found at DC Comics:

You can read an in-depth interview, with behind-the-scenes revelations about the issue with Toon Zone and World's Finest here.

I also did a short interview about it with Pulse, which will run soon

ITEM #2: I did my first "in person" live interview with STUN! Listen to me ramble on about a variety of topics (for almost thirty minutes!) here.

ITEM #3: After an unprecedented nine stories in Star Wars Tales, I return to the Star Wars Universe with a story in the upcoming Clone Wars Adventures Volume 8, which features the return of a character I originally created in an issue of Tales. Solicitation information from Dark Horse here. 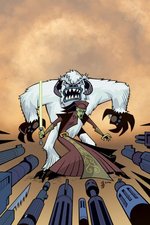 ITEM #4: I have also written what will be the third volume of the Hellboy Animated series of graphic novels! Entitled, "The Menagerie," it should be out sometime in the latter half of the year from Dark Horse, featuring artwork by returning artist Rick Lacy.

ITEM #5: Speaking of Hellboy, I am co-author on the upcoming Hellboy Companion, having written the expansive official timeline section of the book. Solicitation information from Dark Horse here.

ITEM #6: And in case you missed it, I wrote the graphic novel adaptation of the Sam Raimi produced horror movie The Messengers, featuring artwork by the legendary Kelley Jones. Solicitation information from Dark Horse here.

ITEM #7: I've added a new section to my website called When the monkey speaks... in the WHEN? section. There you can read the most recent stuff I'm up to. Check it out at the link to my website here.