catching up on a few things

• The freaking Phoenix Suns, who had a kick-ass third quarter tonight, led by the hot shooting of Tim Thomas, caved and lost to Dallas in this Game 5 of the seven game series. Dirk Nowitski had 50 points! Shit! I'm amazed the Suns weren't quicker to double-team this one-man wrecking ball. This time of the year i get so fired up with hoops fever, that by the time the Finals are over, i'm exhausted, and glad for the season to be over. (But not so much as my wife.)

•Â International Comics Ambassador John Weeks has uploaded yet another fine installment of his wonderful Comics Lifestyle. A former staffer at both Dark Horse and (maybe?) Fantagraphics, and a stalwart in the Australian and New Zealand scene from years ago, John has spent the last few years working in Cambodia, and is, on the side, feverishly attempting to document the comics scene there. Boy, the world could use a few more good men like this.

• Took some books in the other day for trade at Powell's City of Books (one of the most glorious bookstores in the universe), and picked up a luscious coffee-table art book called Art Out of Time: Unknown Comics Visionaries, edited by Dan (Ganzfeld) Nadel. Essentially, this entire volume provides stellar samples of work by cartoonists who toiled in the trenches like their more well-known comrades, but just never received the same attention. It's a really fabulous book, and most importantly, Nadel chose to showcase entire story strips, so that the reader isn't limited to just bits & pieces. The only flaw in the whole book was the weird inclusion of underground legend Rory Hayes. Not that Hayes' work isn't worthy (even though i feel it's the weakest work in the whole, and just not to my taste), but more that it sticks out like a sore thumb from the rest of the work in the book. Still, this Abrams release is well worth every penny. I can only hope that it does well, and that we'll see more archival books like this in the future. Well done, Dan. 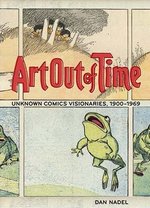 •Â Recently wrapped up the run of Ed Brubaker and (in this last three issue story arc) Greg Rucka's unbelievably good comic Gotham Central. Wow. What a damn cool series this was... easily the best cop drama that i've ever read in comics. The conceit …Â how does the Major Crimes Unit operate in a grimy city littered with super-types …Â is a no-brainer, which i can't believe took this long to come along. "The Brube" and Greg Rucka (who either traded story arcs or collaborated on them together) were really in their element with this series, and the early issues drawn by Michael Lark are nothing short of world-class. That said, while he started out a little shaky, regular replacement artist Kano, along with the sturdy inks of Stephano Guadiano, really developed an excellent style that lended itself perfectly to the book. I hope DC has the wherewithal to finish collecting the entire run into trade paperbacks. 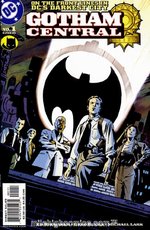 •Â Another sweet "pop single" (a perfect term coined by Warren Ellis for one-shot gem) is the Oni Press Free Comic Book Day effort this year, called Free Scott Pilgrim. This comic shouldn't be as good as it is, given that the narrative is fractured, and the reader is dropped into the story willy-nilly (both qualities also shared in the graphic novel series) … but in a similar manner of cartoonists like Paul Pope, the sheer blistering energy in this comic negates any story inconsistencies. Bryan O'Malley's art too is a fluid blend of contemporaries in the lush Craig Thompson school, fused with a healthy dose of manga influence. Great stuff, and very highly recommended.

"I've been enjoying your Hey Bartender blog for a few weeks now, and since you were just lamenting the lack of topics, and I've been meaning to make a request anyway...
Â
"Awhile back, you alluded to the problems you guys have had bringing From Hell back into print, and wondered aloud if anyone really cared. I keep my ear pretty low to the ground on all things From Hell, and haven't really heard the deal with not having this book out during Alan's most popular time here on Planet Earth. I, for one, would love to hear the whole, sordid tale.
Â Â
"Keep up the good work on the blog … yet another X-Men Omnibus convert, here, thanks to your comments!"

Thanks for writing, Ron.

O.k. Here's the dilly. Eddie Campbell had been self-publishing From Hell through his imprint Eddie Campbell Comics, up until two years ago when Top Shelf took it over. Up until then, we were just handling distribution. When Top Shelf picked it up i did a little tweaking to the design and added flaps to the cover. It looked great, and sold through pretty quickly. Then the fuckery started.

The printer that Eddie had been using for the life of the book theretofore, Prenney Litho, had just received a $20,000 advance from ourselves and co-publishers Knockabout from England for another printing, when they informed us that they were filing for bankruptcy. Oh joy. (Flashbacks of Black Tuesday and the Twelve Hour Miracle popped in my head.) Unfortunately, they also had the only extent film for the book, and when the owner told us that he was planning on restructuring, and to hold on until then, we really had no choice but to sit back, cross our fingers, and hope that this would happen. Months came and went, and still we heard the same sad song.

Clearly, we were in a bind. Finally something happened which forced our hand. Prenney up and disappeared entirely. No phone, no email, no website, no 20K, and no book. Zippo. And so it was at this point, that Eddie Campbell had to dig out the master photocopies that he had made (having long since sold off the original art for the book) and began scanning. How long this took, i'm not sure, but it must have been a long long while. After ten years, i've done my share of scanning, and i can tell you firsthand, there are few things more mind-numbing than this.

Move ahead, eight or ten discs containing the scanned art arrive here for me to work with, and as i began the (also) long and grueling process of cleaning up Eddies scans (a necessary process, erasing defects like stray pencil marks, gobbed-up white-out, hairs, dust, and what have you) i discover yet another problem. It seems that as Eddie was burning discs for me, his computer was in the process of dying. The result of which, at least a third of the files were corrupted. (Most often manifested by weird lines running arbitrarily through the pages, making them unprintable.) AAAARRRRRRGGGGGGGHHHHHHHHH!!!!!!!!!!! Make it stop!

So finally, after all of this, i'm just days away from sending this to our own trustworthy printer, Lebonfon (formerly a subsidiary of the behemoth Quebecor), hopefully in time to make San Diego.