My hat is off to reader Chris Rice, who wrote in to inform me exactly who it was that published that fabulous Metropol hardcover i was gushing over while crashing Philip Simon's housewarming party a couple weeks ago. Many thanks, Chris. 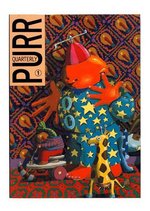 Chris writes:
I read on your blog about the Metropol HC you saw, thought you might like a little more info. It was published by a small company called Blue Eyed Dog in the mid-nineties, a company founded by English journalists Cathi Unsworth and David O'Sullivan. Igor Goldkind was involved as well (as he seemed to be in everything in London between the mid 80s-90s). They didn't last long, although they put out several issues of a wonderful magazine called Purr, a combination of words and comics, which had writing by Harry Crews, Hubert Selby, Henry Rollins, Iggy Pop and others, plus articles about McKeever, Dame Darcy, Edward Gorey, Crews, HR Giger...the list goes on. They put out records too, mainly a series of split 10" editions which included bands like Tindersticks and Gallon Drunk. 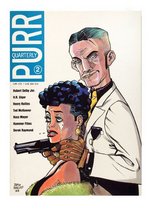 Metropol was their first colletion, with a Richard Kern book scheduled to follow, but something went wrong almost immediately after Metropol came out, and it was the last thing they ever published. 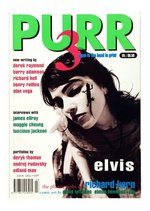 Brett writes:
Damn, i'd love to stumble across an issue or two of this Purr magazine. Looked pretty groovy. 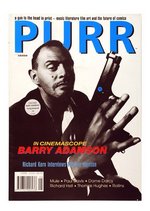 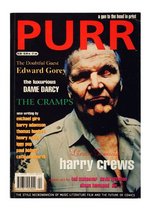