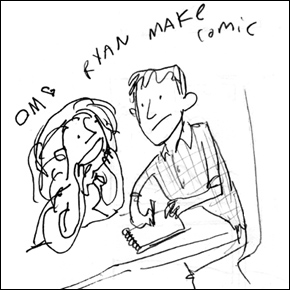 Ryan Pequin was born in Canada and has so far remained there, mostly. He is diminutive in stature and has one less bodily organ than folks are supposed to, yet he is basically happy with his lot in life somehow. He started thinking that he might want to draw some comics now and then sometime in 2005, and has more or less kept up with that ever since. He attended the University of Victoria seeking a degree in Fine Arts, eventually abandoned Fine Arts for English, and is currently abandoning English to learn Graphic Design and Illustration in a different city entirely. He plans to abandon that, too, once he has to actually open a book and read what is inside of it.

Ryan's 'serious' website can be found at www.ryanpeq.com, though he posts much more often at ryanpeq.livejournal.com. His last name is not 'Peq' but he understands why people often think that it is.