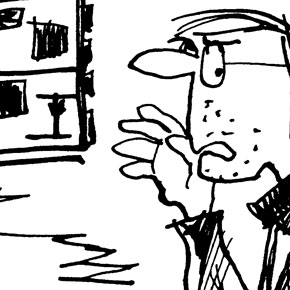 Glenn Dakin lives in Cambridge, England, with his girlfriend Sara and 3-year old son Cory. He was raised on sixties’ superhero comics such as The Monkees versus the Sea Monkeys. He was also a keen reader of the Moomintroll books by Tove Jansson. As a teenager he became a big fan of Johnny Hart’s BC and Wizard of Id cartoons, moving on to George Herriman and Elsie Segar ( Popeye) in his twenties. Discovered Eddie Campbell in the 80’s and was part of the British self-publishing free-for-all of the time. Currently writing comedy for TV and radio in the UK, plus kids TV shows including Bob the Builder. Has written many children’s books including The Not-Yeti (an abominable snowman who puts everything off till tomorrow). Glenn believes that there is a giant ant called ‘Red Ant’ who lives in the moon and manipulates events on earth, forcing Glenn to spend a lot of time in coffee bars and pubs for reasons no-one as yet truly understands. His catch phrase is ‘high on life, man!’ and his philosophy is ‘transcend but for God’s sake don’t use the word ‘transcend’.