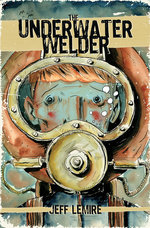 The love just keeps rolling in for Jeff Lemire and his new graphic novel The Underwater Welder!

On top of the earlier praise we rounded up a few weeks ago, several more big pieces have landed this week -- including the book's appearance on the New York Times bestseller list!

Jeff has a short interview in the Times with George Gene Gustines, who notes "he has not lost his ability to pack an emotional wallop."

A longer interview appears in the major Canadian magazine Maclean's, where Jeff reveals, "This book is about two things: the pressure of becoming a parent, and the pressure of trying to follow up Essex County with something just as good. For me, that was really crippling."

Back in the United States, NPR presents an excerpt and a thoughtful review, declaring the book "wise and moving... these pages are poignant and masterful, and represent some of the very best work [Lemire]'s ever done."

Our continued congratulations to Jeff on the success of this very personal and very powerful story!

And if you've already plowed through Welder three or four times and need a new comics fix, check out IFC's in-depth interview with Ed Piskor about his computer-hacker epic Wizzywig: "one of the year’s best graphic novels, combining a thrilling, dramatic tale of curiosity, risk, and consequence, with a fascinating study of what can happen when technology and the ways we use it evolve faster than the government’s understanding of it."