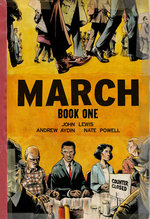 Congressman John Lewis (GA-5) is an American icon, a man who has witnessed history in the making and helped make history himself as one of the key figures of the civil rights movement. His commitment to justice and nonviolence has taken him from an Alabama sharecropper’s farm to the halls of Congress, from a segregated schoolroom to the 1963 March on Washington, and from receiving beatings from state troopers to receiving the Medal of Freedom from the first African-American president.

Now, to share his remarkable story with new generations, Lewis is turning to the graphic novel format, in collaboration with co-writer Andrew Aydin and artist Nate Powell (winner of the Eisner Award and LA Times Book Prize finalist for Swallow Me Whole, NY Times Bestseller for The Silence of Our Friends). The resulting graphic novel trilogy, entitled March, will be released by Georgia-based publisher Top Shelf Productions, known for the thoughtful and award-winning works of Alan Moore, Craig Thompson, and Jeff Lemire.

March is a vivid first-hand account of John Lewis’ lifelong struggle for civil and human rights (including his key roles in the historic 1963 March on Washington and the 1965 Selma-Montgomery March), meditating in the modern age on the distance traveled since the days of Jim Crow and segregation. Rooted in Lewis' personal story, it also reflects on the highs and lows of the broader civil rights movement.

The first volume, March (Book One), will appear in stores everywhere on August 13, 2013. Two weeks later, America will celebrate the 50th anniversary of the March on Washington for Jobs & Freedom.

Throughout the year, Lewis and his co-creators will travel across the country to promote the book, including featured keynote appearances at BookExpo America in New York, the American Library Association’s Annual Conference in Chicago, and Comic-Con International in San Diego.

March is a historic first, both for the U.S. Congress and for comics publishing as a whole, marking the first time a sitting member of Congress has authored a graphic novel. Top Shelf Productions is the first and only graphic novel publisher to be certified by the House Committee on Standards.

In March, a true American icon joins with one of America’s most acclaimed graphic novelists. Together, they bring to life one of our nation’s most historic moments, a period both shameful and inspiring, and a movement whose echoes will be heard for generations. 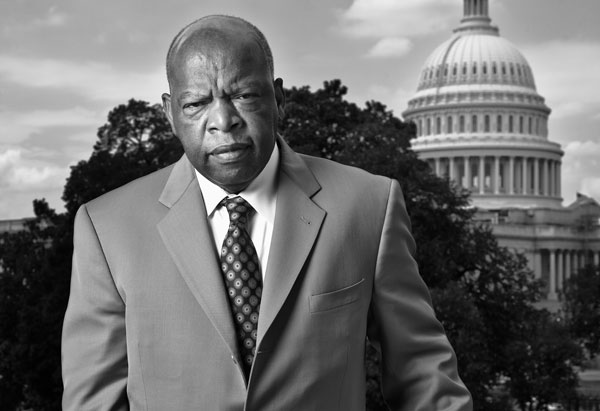 JOHN LEWIS is Georgia’s Fifth Congressional District Representative and an American icon widely known for his role in the Civil Rights Movement.

In 1981, he was elected to the Atlanta City Council. He was elected to Congress in November 1986 and has served as U.S. Representative of Georgia's Fifth Congressional District since then. In 2011 he was awarded the Presidential Medal of Freedom.

Lewis’ 1999 memoir Walking with the Wind: A Memoir of the Movement won numerous honors, including the Robert F. Kennedy, Lillian Smith, and Anisfield-Wolf Book Awards. His most recent book, Across That Bridge: Life Lessons and a Vision for Change, has received the NAACP Image Award. 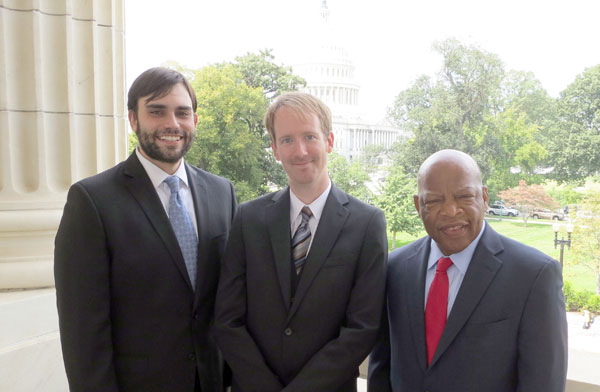 NATE POWELL is a New York Times best-selling graphic novelist born in Little Rock, Arkansas in 1978. He began self-publishing at age 14, and graduated from the School of Visual Arts in 2000. His work includes the critically acclaimed Any Empire, Swallow Me Whole (winner of the Eisner Award and Ignatz Award, finalist for the LA Times Book Prize), The Year of the Beasts, The Silence of Our Friends, and Sounds of Your Name.

Powell appeared at the United Nations in 2011, discussing his contribution to the fundraising fiction anthology What You Wish For: A Book For Darfur alongside some of the world’s foremost writers of young adult fiction.

In addition to March, Powell is also currently drawing the graphic novel adaptation of Rick Riordan’s #1 international bestseller Heroes of Olympus: The Lost Hero, while writing and drawing his own forthcoming graphic novel Cover and assembling the short story collection You Don’t Say.

TOP SHELF PRODUCTIONS, based in Atlanta, GA, is the literary graphic novel and comics publisher best known for its ability to discover and showcase the vanguard of the comics scene. Founded by co-publisher Brett Warnock in 1995, and joined by co-publisher Chris Staros in 1997, Top Shelf has produced over 250 comics and graphic novels that have helped to revitalize interest in comics as a literary art form.