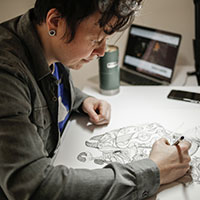 Kate Glasheen graduated in 2004 from Pratt Institute in Brooklyn, NY. Her work finds its punchlines among the tragic and unimportant and testifies that there’s something funny about something that’s not funny at all.

Kate's interests span from comics to gallery shows and everything in between. Her published works include Varsity Noir (Webtoon), Hybrid Bastards! (Archaia Entertainment), The Sakai Project (Dark Horse Comics), multiple entries in the Graphic Canon series (Seven Stories Press), and the Kickstarter-funded Bandage: A Diary of Sorts. Kate's commercial clients include Paramount Pictures, Cartoon Network, AMC, Topps, Inc., and many others, with work spanning such properties as Star Wars, Terminator, and Adventure Time.

A Radical Shift of Gravity