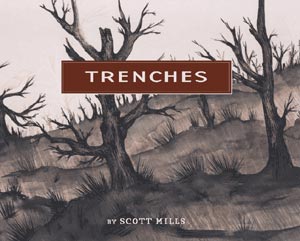 Winner of the 2002 Ignatz Award for Outstanding Story.
Scott Mills hits the trenches ... Lloyd and David Allenby are two brothers with little in common, except the will to survive what we've come to know as World War I. When they arrive in the trenches of the Western Front, they have no idea of the misery and violence that awaits them. Can an aloof Major be the father figure and guiding force in their desperate battle for survival? Or will the estranged brothers be swallowed up before they can come to terms with each other, trapped in the clutches of the Great War? ... Trenches: the beautiful story in an ugly war. -- 176 pages, Diamond: STAR15787